Hbase is NoSQL distributed scalable Hadoop database by Apache which scales horizontally very well. The data in Hbase is column-oriented database in which structured data is stored in key value pairs. Hbase is written in Java. Hbase is inspired from Google Paper - "Bigtable: A Distributed Storeage System for Structured Data". Hbase is used primarily where very fast read-write access is needed. In this post I will show how to install Apache Hbase on Windows. Hbase can be used independent of Hadoop.

I don't have Hadoop installed. I will be installing Hbase without Hadoop. Hbase can be installed on single machine or on a small cluster.

Before we start, make sure you have hbase installed and working. If not do following to install hbase.

unzip and untar the file. Now we need to set the system variable HBASE_HOME to the hbase directory.

You would need to edit couple of more files to enable hbase on Windows. Refer to following link to know more about this...

One you have done that, do following in your windows command prompt to see if it is working properly.

Once you have successfully started hbase. We need to install front end client to access hbase now.

Best way to install happybase is using Anaconda. Assuming you have Anaconda 3.7 installed.

Lets first bring up the Anaconda command prompt up and run following command to install hbase. 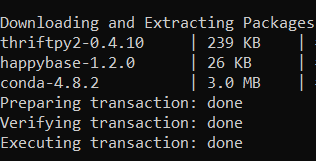 Thats it now you can invoke ipython and access hbase using python.