Getting Started With Python Package Managers

What is a Package Manager in Python?

You are probably familiar with the concept of package managers if you are coming from other languages. JavaScript uses npm for package management, Ruby uses gem, PHP uses composer and so on.

Package Manager is a tool that allows you to manage the dependencies for your project that are not part of the Python standard library. A dependency is code that is required for your program to function properly. These often come in the form of packages.

Packages can also have their own dependencies. Managing all these dependencies can be hard because packages may require specific versions of their dependencies. It’s easy to break something by modifying dependencies manually - and to avoid these issues, a good Package Manager is required.

A beginner’s guide to Pip

Package management is so important, that starting from version 3.4 for Python 3 and 2.7.9 for Python 2, Python has its own standard package manager - pip which is part of Python distribution.

How Does Pip Work

When installing packages, pip will first resolve the dependencies, check if they are already installed on the system, and, if not, install them. Once all dependencies have been satisfied, it proceeds to install the requested package(s). This all happens globally, by default, installing everything onto the machine.

One confusing aspect of installing packages with pip is that it tries to install them into you global Python environment by default. Yes it does and therefore all the new installed packages become available globally on your system, which is great for convenience. But it also causes issues if you're working with multiple projects that require different version of the same package. For example, you will definitely face version conflicts if one of your projects needs 1.0 version of package, and another requires 1.1. And it gets worse in cases when you might also have different programs that need different Python versions.

To demonstrate how it works, let’s create a virtual environment and install some package.

How To Install Python Virtual Environment

Note - For this example, we’re using Python 3.7, Windows 10, and Windows command prompt (cmd) but we have also provided you with Linux commands.

Running the activate command configures your current shell session to use the Python and pip commands from my_venv  environment. Have you noticed how it changed command prompt with (my_venv) ?

4. Next up, let’s install some popular package for sending requests

You should see an output similar to the one above. You can also see that the current environment is using pip version 10.0.1, but version 20.2.4 is available. It also shows the command you should use to update pip, so let’s do that:

Now that we have installed requests and upgraded pip, we can use the list command to see the packages installed in our environment: 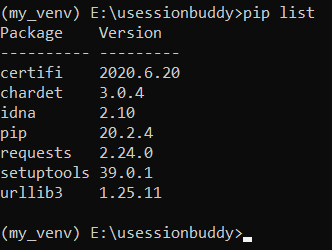 Here we are printing response status code, and as you can see getting 200. Everything works as expected.

Pip can install packages from many sources, but Package Python Index (PyPi) is the primary package source which it uses.

There are two options to install packages from PyPi:

The way to search PyPi via command line is using pip search <package_name>. Take a look at the example below to search package "requests".

The search term yields quite an extensive collection of packages. Unfortunately, there isn’t much information other than a brief description.

Most of the time, you want to search for packages directly on the PyPI website. PyPI provides search capabilities for its index and a way to filter results by the metadata of the package, name of framework, topic, development status etc.

Another option to find a package is to Google it. The widely used Python libraries will show up at the top of google searches, and you should be able to find a link to the package in PyPI or its source code repository.

Understanding and using virtual environments also puts you on the right track to use more advanced dependency management methods like specifying project dependencies with requirements.txt files.

Python requirement files allow you to specify exactly the packages and versions that should be installed on your system.

You can easily dump all the packages and their versions installed in your virtual environment with pip freeze command.

In case if you need to replicate the environment in another system, you can run...

Pip is the de facto package manager in the Python world, but there's a lot of greater tools and libraries to help simplify and improve package management. In this section, we are going to take a look at pip alternatives, Python community providing to other Python developers.

Pipenv package management tool that “aims to bring the best of all packaging worlds” to Python. It’s gaining a lot of traction among the Python community because it merges virtual environment and package management in a single tool.

It also solves some of the most common hiccups you will run into when manually managing dependencies through pip, like versions of packages, separating development and production dependencies, and locking versions for production.

Poetry is another pip alternative that is gaining a lot of traction. Like Pipenv, it simplifies package version management and separates development vs production dependencies, and it works by isolating those dependencies into a virtual environment.

If you are coming from JavaScript and npm, then Poetry will look very familiar. It goes beyond package management, helping you build distributions for your applications and libraries and deploying them to PyPI.

Conda is a package, dependency, and environment manager for many languages including Python. In fact, its origin comes from Anaconda, which started as a data science package for Python.

Conda is widely used for data science and machine learning applications, and uses its own index to host compatible packages.

how to change or setup timezone on Ubuntu

Error no space left on device in Linux

How To Install TypeSense On Centos